Olaf Diegel is a familiar name in the world of additive manufacturing, largely thanks to his collection of self-designed/manufactured 3D printed guitars.

When he is not printing these intricate and functional instruments, he is working as Professor of Additive Manufacturing at the University of Auckland, where he has access to a lot of fun technology to play around with.

Most recently he and his team have been experimenting with their full color Mimaki 3DUJ-553 printer, and during some exploratory testing of the machine’s capabilities, they decided to see how well the printer could mimic a human face to test the color quality of the printer.

How well did the first print come out?

See for yourself in the image below, which resembles a scene from the movie Darkman (in which a scientist turns superhero and 3D prints himself a whole bunch of new faces to fight evil).

As a side note, it does seem that 1990’s Darkman appears to be the first appearance of a 3D printer-type device in a movie. If you can think of an earlier movie depicting AM technology, then let us know in the comments. And no, Star Trek doesn’t count. Also check Darkman out. It’s a great movie.

“I first printed this random face off the internet,” said Diegel on the first test print.

“But that was too boring so that’s why we decided to print my own face, just to see if the print quality was good enough to fool a phone facial recognition system.”

Did the uncanny face fool the computer? Of course it did!

The version of Diegel’s own face used to trick the facial recognition software is shown below. 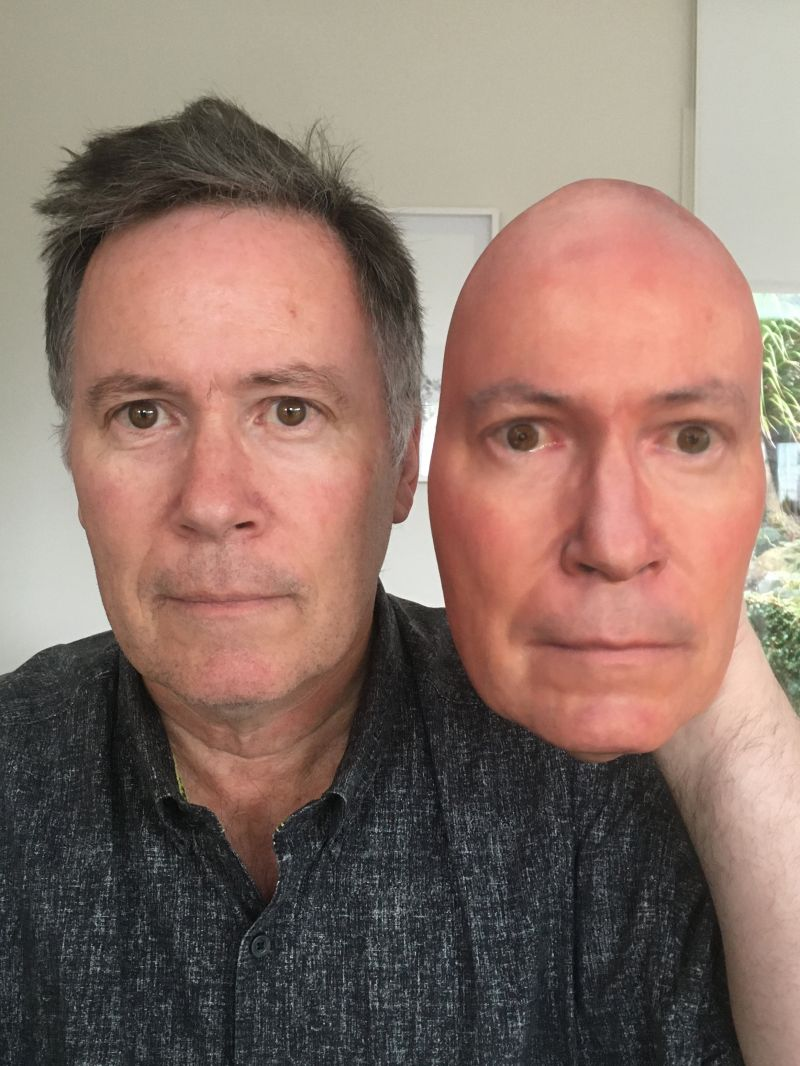 The printer itself uses full color UV-cured acrylate materials which are deposited via a material jetting process, and are rapidly cured by the UV before the next layer is jetted on top.

The print of the face took approximately 9 hours to print, and was printed in a standard quality mode of 32 micron layer height. This printer can have an increased resolution at 22 micron layer height, but apparently this level of quality was fine for the task of duping the machine.

The post processing involved removal of the support wax, by hand, followed by an hour in an ultrasonic cleaning bath. A manual brushing to remove any remaining support debris and a final clean with isopropyl alcohol and the face was ready for “makeup”.

Makeup in this case involved up to 4 coats of matt clearcoat, and a gloss clearcoat to add some sheen to the eyes.

This is an interesting point about the aesthetics of these things. Surface appearances are determined by shape, color, texture, opacity and gloss.

Most 3D printers really have control over the shape and color of the printed object only, although as we saw in this previous article from last year, researchers have demonstrated variable gloss on FDM type printers, so it’s likely only a matter of time before this technology bleeds over into other AM processes. It’s just a nozzle connected to a varnish reservoir anyway. It already has more in common with the material jet process than it does with FDM.

So, the 3D printed face fooled a computer. What does this mean?

Currently, the face is printed from solid material, so while it may fool a computer, it likely won’t fool anybody else, as it is completely rigid and inarticulate.

But it does have obvious application in movie and theatre for prop-making, and the potential for prosthetics is promising. The matching of prosthetics to a patient’s skin tone is often a cause of concern to some wearers of traditionally made prosthetics , and a high fidelity color printer could certainly be of benefit there.

It does seem only a matter of time before these very minor technical hurdles are overcome however, and we will have the capability to print perfect wearable photorealistic masks.

Interesting times are seemingly ahead for supervillains, humanitarians and pranksters alike.

What a time to be alive!