Damascus steel is a highly-valued type of steel that’s created by repeatedly folding together two steels that have different levels of carbon content. High-carbon steel is incredibly hard, but it’s more brittle than steel with less carbon. Folding the two together unlocks both hardness and strength, and the signature wavy bands that give it away are just an aesthetic bonus. Though Damascus steel comes from an ancient blacksmithing technique that dates back to 13th-century Syria, Philipp Kürnsteiner of the Max Planck Institute for Iron Research is hoping to bring Damascus steel into 2020 with a technological update: 3D printing. 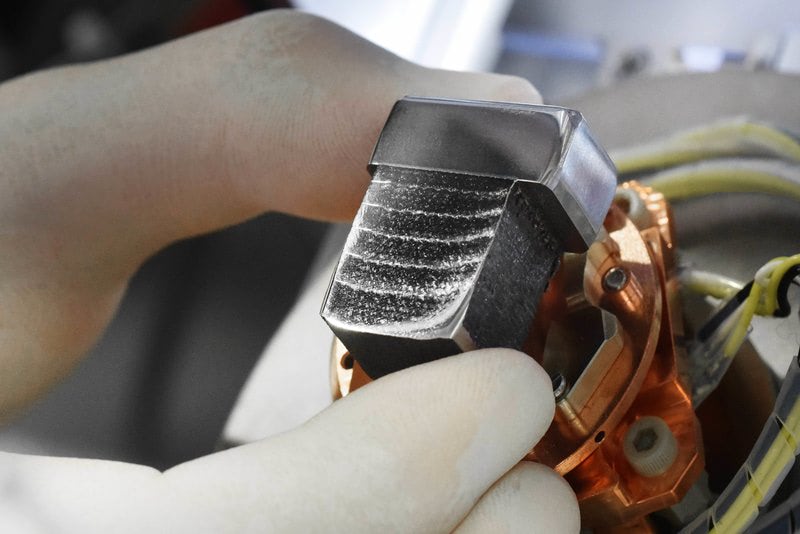 A critical part of the technique to fold steels into Damascus is the quenching step, or rapid cooling. Rapid cooling is necessary for the microstructural changes to take place that make the steel both hard and tough. The atoms move into a crystalline form during the cooling process. In a traditional forge, quenching is done with oil or water. After the metal is forged, a series of annealing (heat) treatments lead to the precipitation of nickel-titanium particles that make steel significantly harder, even with a low carbon content. Those particles are what make maraging steel so hard, and the annealing and precipitation treatments are what make it so expensive because they can take over 48 hours of heating and cooling to complete.

For their tests, the researchers used a steel alloy powder composed of nickel, titanium, and iron, elements that will precipitate into nickel-titanium particles under the right circumstances just described. In a metal 3D printer, rapid cooling was achieved by simply turning off the sintering laser for periods between some of the layers. Easy. The cooling allowed the crystalline formations to occur, and the heat produced by the laser coming back on to print more layers served as an in situ heat treatment to precipitate the desirable particles.

To determine if the printing technique achieved the desired result, the researchers atom mapped the test piece, and the nickel-titanium particles were indeed present. They went a step further and ran a strength test; the sample withstood 20% more stretching force before breaking when compared to a piece printed traditionally with the same steel alloy powder. That’s not as strong as maraging steel but is still an impressive change considering that it took a fraction of the time (and cost) that’s required for a full annealing and precipitation process.

Though they are only in the discovery phase of their research, they hope that eventually “one could manufacture tools that are soft and tough on the inside and only the outer skin is precipitation hardened without the need to apply a coating or a case-hardening treatment.”