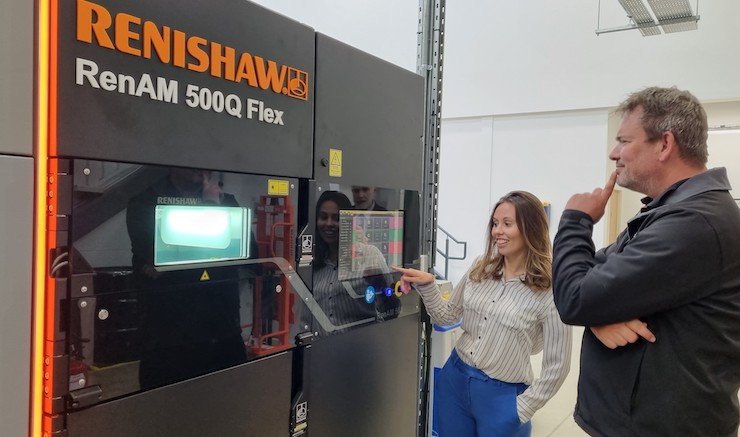 After officially opening its doors in July, the Digital Manufacturing Centre has been named as one of the first sites to beta test Renishaw’s new RenAM 500 Flex metal additive manufacturing system.

The engineering-led facility, located within the Silverstone Technology Cluster, is home to a number of 3D printing and digital manufacturing technologies including machines from RPS, DyeMansion and more. This latest addition will build on an existing collaboration with the UK-based engineering firm and will see the DMC take part in ‘in industry’ testing to verify the RenAM 500 Flex’s capabilities in a commercial production environment.

The RenAM 500 Flex builds on the RenAM 500 system and is similarly available in both single and quad-laser configurations. It has been designed to allow easy switching between material types which is said to improve pre-production testing and material selection, while also allowing users to establish parameters that can be easily transferred to more automated machines such as the RenAM 500. Renishaw has also introduced ‘material change kits’ which ensure contaminant-free material changes and reduce material loss between transitions. The machine also features enhanced gas flow capabilities and is equipped with a simplified, non-recirculating powder system that enables a complete material change within one eight hour shift.

Jonathan Archer, General Manager at Renishaw, commented: “One of the most limiting factors in metal additive manufacturing is the restriction on material changes. This hampers the speed of material testing, impeding exploration and experimentation in the development and production of new parts. Our engineering development team have comprehensively addressed this challenge with the exciting new RenAM 500 Flex.”

Kieron Salter, Chief Executive Officer at the DMC, added: “As one of the UK’s leading engineering and advanced AM providers, we strive to find the right production solutions to solve customer challenges. An extremely important part of that development process is material selection. While variable material pre-production testing was not previously feasible, the ground-breaking RenAM 500 Flex enables it directly. Better still, the parameters that we develop on the Flex can be easily transferred to our regular Renishaw RenAM machines for serial production. We are thrilled to have been selected as a beta site for this new machine and very much look forward to once again working with Renishaw’s talented team.”

The RenAM 500 Flex will be officially launched at Formnext.