Huge scale metal AM is getting a lot of coverage recently.

Recently we published an article showing how NASA is using DED for manufacturing big rocket engines using copper alloys. They have found that DED is more suitable for large scale printing in certain alloys, and they may even be able to print rocket engines for the Space Launch System program. That’s pretty big.

But LPBF (laser powder bed fusion) is not out of the fight yet, in terms of large scale metal printing, as a team of researchers at the Fraunhofer Institute in Aachen, Germany have recently revealed.

Back in 2017, the Fraunhofer-Gesellschaft launched their FutureAM collaboration among the various Fraunhofer Institutes and partners, with the goal of digitizing the entire AM product lifecycle and pushing the technology far beyond what is currently capable.

Specifically, the partnership between the 6 Fraunhofer Institutes had two main goals:

1. Establish a comprehensive cooperation platform for the highly integrated cooperation and use of the decentrally distributed resources of the Fraunhofer-Gesellschaft in the field of AM.

2. Create the technological prerequisites to increase scalability, productivity and quality of AM processes in a way relevant to praxis for the production of tailor-made metal components.

In summary, the project was aimed at greater integration of the Digital Thread into manufacturing operations while making metal parts bigger, better and faster. The stated goal was 10x faster, in fact.

The project is about to end, and the collaborators have made leaps and bounds in those goals, and are ready to bring it to the main stage.

“We are now on the threshold of industrial implementation”, sayid Christian Tenbrock, futureAM project manager.

“The expertise we have gained together is now to be transferred to industrial application.”

The project has been split into 4 main domains of research, which are:

One application is in the production of large metal aerospace components, such as that in the image below. 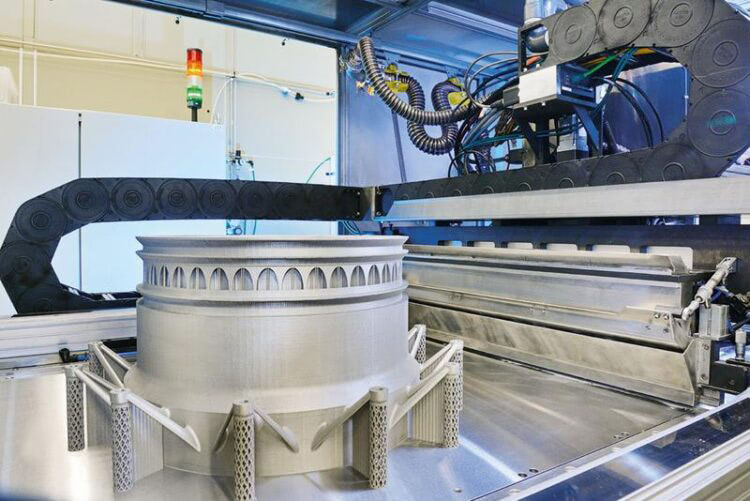 Rolls-Royce engine components could be printed 10x faster thanks to the acceleration of the FutureAM project. (Image credit: FutureAM)

The above component was produced by engineers at Fraunhofer ILT in Aachen, and is a demonstration of XXL scale metal printing. The component in question is part of a Rolls-Royce gas turbine engine, typically used in aerospace and power generation applications.

The team had a large LPBF system custom made by local machine builders, and was created with a build volume measuring 1000 mm x 800 mm x 400 mm.

In their process, a code is generated for the part being manufactured which is used to track the progress of the component as it passes from manufacturing station to station.

As the part is taken from the printer, it is automatically scanned with a 3D scanner to ensure that it is dimensionally correct, and compared to the initial CAD model to note the differences. The computer then determines the optimum post-processing strategy.

The optimized post-processing strategy is then sent to a robot which performs the post-processing, while continuously scanning it and rectifying the geometry until it is perfect (or as near as dammit). This is a high level of automation and in principle should remove a lot of the cost associated with post-processing, which can be very hands-on.

In addition to the four research areas in the project, the institutes have set up a Virtual Lab, which aims to collate all the tools and resources in one single place, allowing for better collaboration and information sharing…and also the use of Digital Twins for automated design and manufacture.

Exciting times indeed are ahead for end-to-end digital manufacturing.