As renewable energy initiatives sweep across the lands (and seas) of the world, an interesting data point has emerged: in many parts of the world, like those near coasts, mountain ranges, and plains, wind power is more efficient than solar power. Energy companies have been rapidly installing wind farms in those areas, and there’s more wind at higher altitudes, so they’ve been building taller and taller wind turbines to reach those faster wind speeds. Now, to capture more of that sweet high-speed wind, GE Renewable Energy is planning to 3D print the bases of the massive turbines to lift them twice as high as current models! 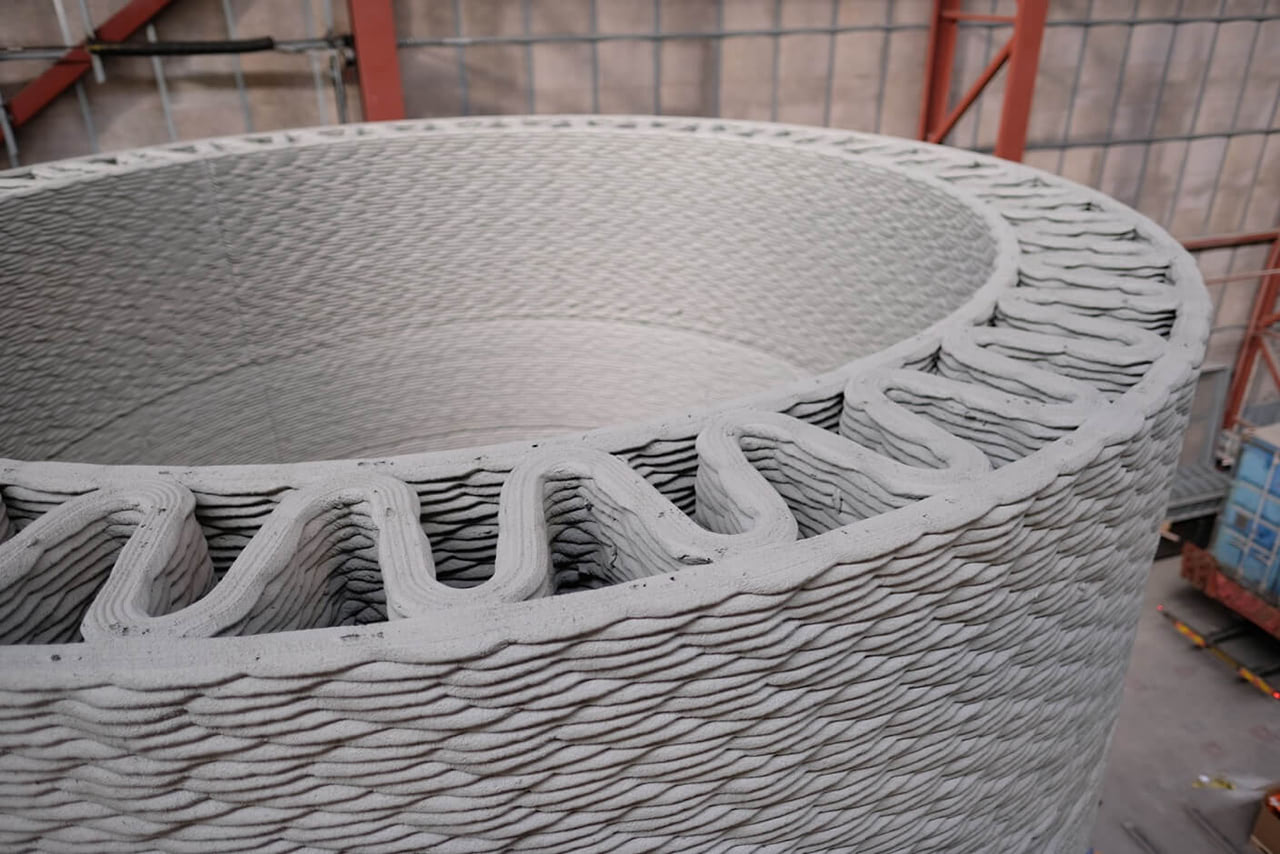 A prototype of a wind turbine base 3D printed from concrete. Image credit: GE

If faster winds are found higher up, and more energy can be generated with faster winds, it should be as simple as building taller wind turbines, right? Yes and no. Yes, it’s better to build them taller, but building them taller is not so simple. The algorithms needed to calculate a cost benefit analysis for wind turbine installations are complex.

Going taller obviously costs more as there’s more material required to build the turbine, but to support the additional forces of the increased mass and wind speeds, the bases also have to be larger. Big-bottomed bases make the turbine world go ‘round. In order to keep fabrication costs down, the bases are typically built from precast concrete and then shipped on semi-truck platforms to the installation site, so the width of highways and the clearance height of overpasses are limiting factors on size, meaning a base can be no wider than the 4.5 meter diameter limit imposed on highways. Of course, larger bases could be constructed on-site, but the costs of a typical construction operation would offset too much of the energy generated by the turbine. That’s where 3D printing comes in, specifically concrete printing.

3D printing is in GE’s DNA and we believe that Large Format Additive Manufacturing will bring disruptive potential to the Wind Industry. Concrete printing has advanced significantly over the last five years and we believe is getting closer to having real application in the industrial world. We are committed to taking full advantage of this technology both from the design flexibility it allows as well as for the logistic simplification it enables on such massive components. Matteo Bellucci, Advanced Manufacturing Technology Leader at GE Renewable Energy

The automated (low labor costs) and additive (low waste) aspects of 3D printing could generate enough cost savings in the on-site construction of turbine bases that going all the way up to 200 meters becomes economically prudent. Most wind turbines currently top out at 80 meters so going to 200 is no small change. To make quick work of the project (the plan is to deploy the new printed bases by 2023), GE has partnered with COBOD International, who will design the robotic automation and build the 3D printer, and LafargeHolcim, who will develop the specialized concrete material for printing.

An 80-meter wind turbine generates 15.1 GWh a year. In comparison, a 160-meter would generate 20.2 GWh, an increase of more than 33%. It’s no wonder GE is looking to the skies. Their first 10-meter high prototype was successfully printed in October of last year so expect a taller one any day now.