Fashion designer Irina Tosheva has turned to the Zortrax M200 to create bespoke fashion accessories and ornaments that have taken her designs to a higher plane.

At SS16, the fashion show in Kosovo that pays homage to the vibrant Eastern European design fraternity, Tosheva stood out from the crowd. She did so with a scintillating combination of interesting designs and integrated technology. She had something different to offer. She had a 3D printer.

Even haute couture counts the cost

Even in the world of high fashion, designers are limited in terms of materials. Truly bespoke buttons, fastenings and more cost a vast amount when they’re produced by traditional methods. Ornate additions to outfits, meanwhile, add a layer of complexity that often means the designer rules them out.

A 3D printer, though, can produce bespoke items at a low cost. That means the designer can just focus on breathtaking designs. They can create ornate structures, test them with an outfit and modify them on the spot. Once the printer is paid for, the material costs are negligible when factored in to the price of haute couture. This gives the designer a huge amount of freedom to experiment.

Totally bespoke finishes made a difference

Tosheva used the professional-grade Zortrax M200, which gave her the option of creating plastics or a glass-like finish. Using the Z-SUITE software, her projects were all finished with bespoke accessories and jewelry made entirely for that specific output. A full range of Pastel, Neon and Natural filaments meant she had the full range of colours to work with.

The freedom of the 3D printer allowed her to test the concept of aggressive, solid accessories combined with delicate fabrics, too. She even worked in a structured section to an office shirt. That was almost impossible to get right first time and she had to experiment with the number of sections and the basic structure to get the right blend of functionality and aesthetic appeal. 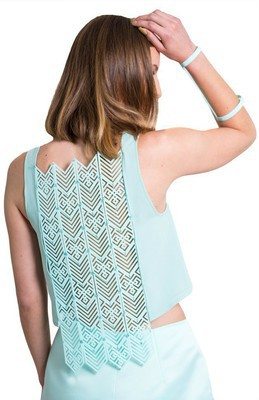 Without the safety net of the printer, she might have written the concept off as just too bold to work in the real world. In fashion, the safe option is rarely the show-stopper.

The designer certainly burnt the midnight oil and the printer was running for 200 hours to create her latest line. It used 2000g of filament in the process.

Of course it saved so much time liaising with suppliers that she could plough the time back in to her collection. It paid off.

Irina was able to hold her accessories to the light and next to the cloth. She saw the interaction and didn’t have to rely so much on her undoubtedly vivid imagination. It helped her create a better look. She is now a huge advocate of the 3D printing process and her success at SS16 should convince other fashion houses to make the jump to additive manufacturing.

She isn’t the first that Zortrax has worked with either. In 2015 the company assisted Danish designer, Iris van Herpen, who was able to make full use of the technology for her unusual combinations of materials. Other designers have used the printer, too. Almost all of them are delighted with how intuitive the system proves to be and how quickly they can incorporate it into their workflow.

Two industries that simply belong together

Fashion is almost tailor-made for 3D printing. A designer only needs a few examples of each piece, but they need to be perfect and ideally bespoke. So a designer might reject 10 accessories before settling on the perfect finish. Inevitably, then, having the tools to make them right there in the studio is a total gamechanger.

It certainly was for Irina Tosheva, a talented Balkan designer who is now ready to take on the world