Modix has made a name for themselves in the world of XL 3D printing with their large-format self-assembly 3D printers and they’re going for the trifecta with their new BIG-120Z. Much like the Tractus3D T2000, the 2-meter tall 120Z is under 32” wide, meaning it can fit through a standard office door. But there’s more to this printer than being office-friendly.

Some XL 3D printer manufacturers have a very narrow focus: size. After their engineers design a solid platform that can print large objects, they put a price tag on it and call it a day. Modix doesn’t stop there. They want their XL 3D printers to print big objects, sure, but they also want to deliver a high-end user experience. The engineers at Modix don’t see why their customers should miss out on all the bells and whistles that come standard on smaller printers, like filament run-out detection, automatic bed leveling, power-off resume, and an optional active air filter.

XL 3D printing offers some serious advantages, chief among them the ability to print large objects as a single piece. That makes for significantly stronger parts while reducing post-processing time and costs since parts don’t have to be glued together, and there are no seams. Under normal circumstances, that leads to increased productivity and cost savings, things of which business owners are rather fond. But in special times like these, there are benefits that outweigh the bottom line. Shachar Gafni, Modix CEO, explains, “Amidst the current global challenges due to the Corona outbreak, we see this as ‘the glory days’ for 3D printing. Modix’s customers are showcasing the capabilities and flexibility of their large Modix 3D printers by producing batches of safety equipment as well as large spare parts needed for medical devices such as CT. We are happy to add the new BIG-120Z to our offering. We are confident it will fit the needs of various industries.”

Here are some of the specs and features of the 120Z self-assembly kit: 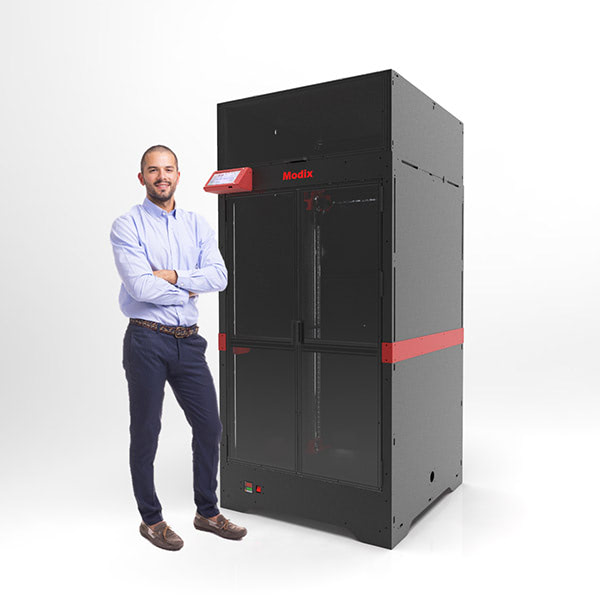 A large build volume combined with ease-of-use features and quality components add up to a 3D printer with a lot of value. This machine is perfect for making signs, artistic sculptures, and wearable fashion pieces, plus everything else a 3D printer can spit out such as prototypes and functional parts. Their COO, John Van El, informs us to be on the lookout for future upgrades, saying “Modix is extending its offering from two products to three. This will be shortly followed by additional larger models as presented during the ‘Formnext’ tradeshow. At the same time, we are busy with developing several add-ons that will increase customization capabilities for both our end-customers and our resellers.”