Antennas need to be electrically conductive, so they either need to be manufactured from a conductive material (metal, typically) or else be made from an insulator coated in a conductor.

Researchers at the U.S. Naval Research Laboratory have been looking at the latter option, and have made use of low cost 3D printing combined with electroplating to create antennas and arrays for applications in radar technology.

Radar antenna and array components are traditionally machined out of aluminium, and as well as being costly, can have lead times of several months.

“The lightweight of the printed parts also allows us to take technology to new applications, where the heavyweight of solid metal parts used to restrict us.”

The researchers are using Nylon to print the substrate structure, before applying the electroplating process.

Traditionally, Nylon is not suitable for electroplating. This is not due to its lack of conductivity (this can be easily modified), but more to do with the underlying chemistry of the polyamide material itself.

Therefore we can assume that the researchers are using an additional step where the surface is treated (some form of etching maybe) before applying the electroplating process.

The press release does not give any details of the electroplating process or the metals plated, however there are a few options for plating a first layer onto a treated polymer, including nickel, electroless nickel, and copper.

Once the antenna is manufactured, it is tested to see how the printing has affected radiation patterns produced around the antenna in an anechoic chamber (pictured below). They are able to assess the way the various printed variants affect the functionality of the radar itself. 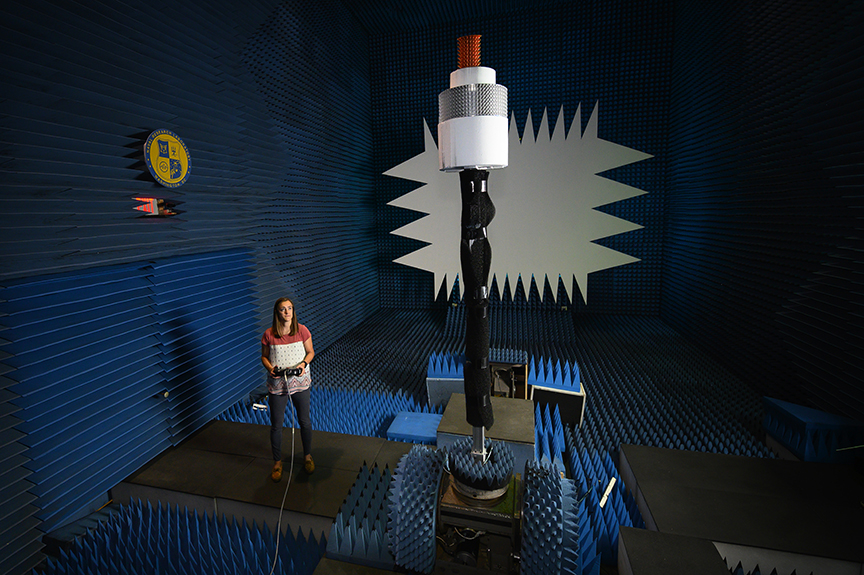 AM components on test inside anechoic chamber (Image credit: US Navy)

The research is not necessarily geared towards full production of 3D printed antennas, more a means to test the geometry of machined antennas by using 3D printing to speed up the design process.

“We are not trying to say we need to 3D print everything and put it on a ship because that is not realistic,” Stumme said. “We don’t necessarily know how it would hold up in that environment. For us, it’s a way to test more design iterations in a short amount of time.”

Cylindrical arrays are arrays of multiple antennas linked together in some form of structure, in this case, a cylindrical one. They provide 360-degree visibility to radar systems, and again, they are very costly and time consuming to manufacture, normally.

The researchers plan to demonstrate a prototype of a cylindrical array aperture for an X-band surveillance system later this year. This could have applications for ships which needs radar capability for its own surrounding area.
The research is looking at placing cylindrical arrays within the masts of smaller boats, using microwave photonics and optical fibers.

“Cylindrical arrays are advantageous because they provide full 360-degree visibility,” said Mark Dorsey, head of the Antenna Section in the Radar Analysis Branch of the Radar Division..

“Optical fibers are valuable because they can allow for long separations between the antenna itself and where the processing is conducted.”

In this upcoming test, the team will compare the effectiveness of 3D printed antennas versus traditionally machined ones.