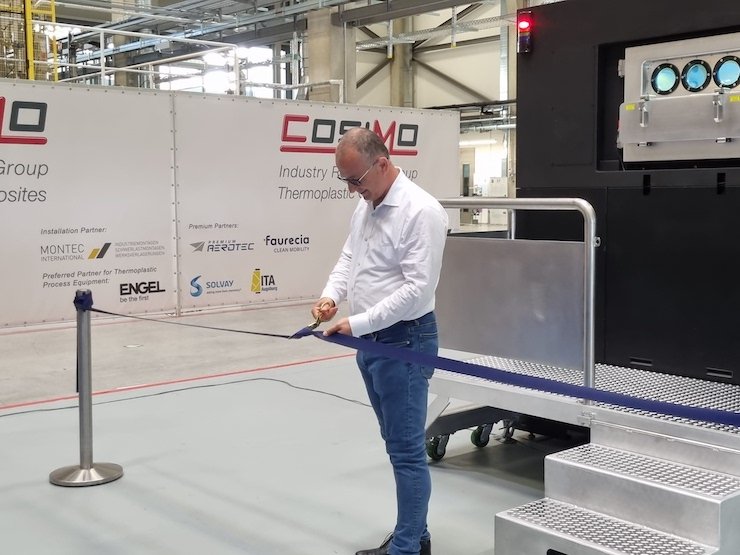 Velo3D has marked the opening of its European Technology Centre in Augsburg with a ceremony that attracted around 70 visitors from all over Europe.

The facility includes a newly-installed Sapphire System, as well as a showroom of real-world applications developed with Velo3D’s metal 3D printing technology.

Delegates included media, partners and customers, including Schoeller-Bleckmann Oilfield (SBO) Technology, who was announced as a Velo3D Sapphire System user back in November. Dr Wolfgang Huebschle of the City of Augsburg was also present to support Velo3D’s expansion into the European market. Augsburg, per Velo3D CEO Benny Buller, was selected because of its comprehensive activity in the aerospace sector. With this facility, the company has positioned itself nearby to Fraunhofer, DLR (German Aerospace Center) and Premium AEROTEC, among others.

At the ceremony, visitors were told of the industries Velo is targeting with its move into Europe – aerospace, energy, oil & gas – as well as the introduction of the company’s ‘Golden Print File’ offering, which will allow manufacturers to send a file to any of Velo’s contract manufacturing partners and have it additively manufactured to the same quality.

Velo3D announced its entry into Europe late last year, with the opening of this demonstration centre to help convert prospective customers into users of its Sapphire portfolio of metal 3D printing systems. The company is establishing a small team within Europe – 14 as of today, up from one this time last year – and is initially targeting just four countries: Germany, Italy, France and the United Kingdom. It plans to mirror the approach to machine sales it has taken so far in the US, with roughly half being installed at OEMs, and the remainder being deployed within contract manufacturers.

The customer/partnership identification process within Europe is ongoing, with the Velo3D hierarchy currently engaging in activity that introduces the Velo brand to the market and educates prospects on the capabilities of its technology.

“What we see is that the success and accomplishments that we have in the United States, is not translated to trust in Europe,” Buller told TCT at the grand opening ceremony. “So, in a large way, the European customers are not knowing about that, they are not aware of that, what they are seeing they are not necessarily believing, so we have to go through this exercise again. It’s not a difference in customers, it’s a difference in our stage in the market.”

Schoeller-Bleckmann Oilfield, the company’s first European customer, forms part of its contract manufacturing network in Europe, allowing Velo to access those companies that have an interest in its metal 3D printing technology but don’t wish to be vertically integrated. A Sapphire machine has been installed at SBO in Austria at the start of 2022, with the company printing parts in Inconel 718 and accepting orders from customers in the aerospace and oil & gas markets. Others are making enquiries too.

“The interest is building,” Dirk Rathsack, Europe Managing Director at Velo3D, said. “As a company enters a new market, you have to do a lot of groundwork. You have to explain yourself a lot, who you are, what you’re doing, and why you think you can help customers with their application. And our experience is that when you get the chance to sit down with a customer and explain what you do and how you think you can help, there is a lot of interest. People regularly, if not almost always, say, ‘that’s amazing. If you can do what you just told me you are able to do that will be a game changer.’ Now that sounds great, and it is, but to adopt a technology, from high interest to using the technology and printing parts, it’s a journey. So, we talk to customers and the question we have is ‘do you have problems that you want to get solved for your production, do you want to ramp this technology into production?’ and if the answer is yes, then we work with them on getting there.”

Velo3D characterises the work it’s willing to do with others as ‘applications which can’t be made by any other tech supplier,’ with the only caveat that it’s a production application. This has helped the company ‘drive our business’ over in the US, and now the plan is to do the same in Europe. That plan may involve some of its new neighbours in Augsburg. Fraunhofer, for example, has a facility adjacent to the Velo European Technology Centre, while DLR has a site just around the corner. Establishing partnerships with organisations like this, Velo believes, would align with its applications focus, while also providing a boost to its brand in a new market.

“In Europe, we tackle a very knowledgeable base of customers and what we find is the more knowledgable the customer, the more work it is for us to unteach them of everything they know because, fundamentally, we need to teach them that there is more than what they know,” Buller said. “The more knowledgable the customer, the more difficult it is. This is one of the big challenges and one of the big tasks of our activity here, to show people how it can help them and, frankly, focus on those people that appreciate that and can create value for their business. And those that don’t, tell them maybe next year or in three years, you will change your mind or your needs will change.”