Traditional 3D printing involves a layerwise deposition, whereas volumetric 3D printing is not layerwise. Instead the object being printed appears almost instantaneously within the photopolymer resin thanks to the laser solidifying the resin in three dimensions, super quickly. 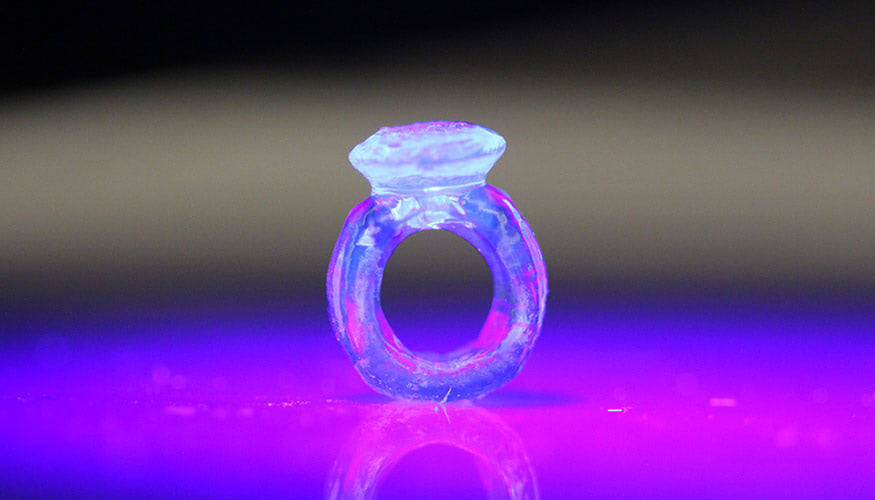 And if you enjoy the ever growing list of AM acronyms, then buckle up because we have a couple more here for you.

VAM stands for volumetric additive manufacturing and a subset of VAM is called Computed Axial Lithography (CAL for short). CAL even has its own (small) Wiki page, just in case you were thinking that we make these things up!

For this article we are going to be looking at CAL, which has been developed by researchers at Lawrence Livermore National Laboratory (LLNL) in Livermore, California in collaboration with UC Berkeley.

CAL works by placing the resin into a cylindrical vial, which is spun around as the laser fires into the resin. The solidifying resinous mass grows outwards from the rotational axis as the laser adds 3D surfaces to the already solidified mass at the core of the item in question.

It grows axially, rather than planarly, hence Computed Axial Lithography.
You can see this process in the animation from LLNL above.

The graphic below shows another way of looking at various processes by category of the process in terms of dimensions. Filament deposition is 0D, CAL is 3D, from a deposition point of view. 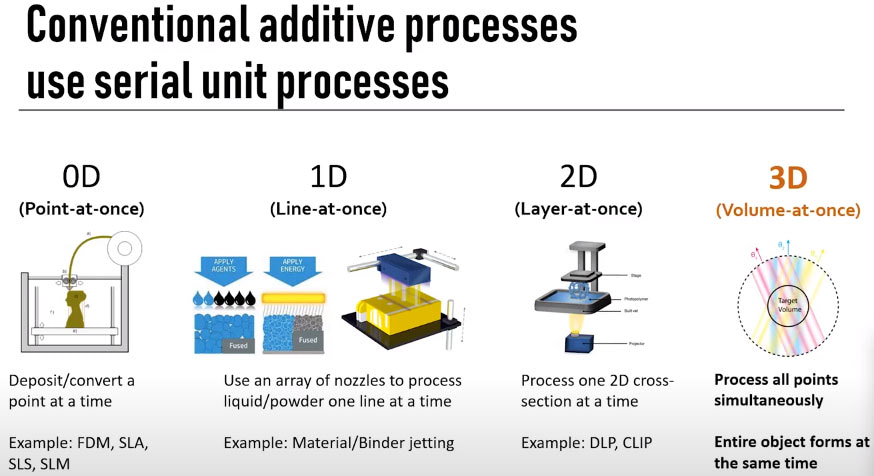 The team from LLNL has just published a paper in the Advanced Materials journal detailing their newly developed resins which will allow a wider range of functionality from the 3D printed plastics.

Their previous resins produced weak and brittle parts (like normal SLA), and with the new materials the team will be able to produce strong parts with varying stiffness and flexibility.

Thiol‐ene materials have more uniform molecular networks allowing a certain amount of tunability of the material during polymerisation and have already found application in the fields of adhesives, electronics, and biomaterials.

The paper introduces this new class of VAM‐compatible thiol‐ene resins and demonstrates the formulation of thiol‐ene resins (for those of you with a polymer lab handy) as well as demonstrating that VAM can print parts as strong as the bulk material equivalent with this layerless method.

Here is a quote from the paper that summarises exactly what they did:

“To exploit controlled thiol‐ene network formation in VAM, we investigated thiol‐ene and acrylate resin formulations differing only in their crosslinking chemistry. Four resins were formulated as shown in Figure 1b from five monomers, each containing either rigid (an isocyanurate ring (ICN)), or flexible (a triethylene glycol chain (TEG)) subunits for tunable mechanical response.”

What does that all mean?

It means they swapped a few molecules around to control the flexibility of the printed parts. Specifically they experimented with the TEG (a plasticizer) and the ICN ( used as a coreactant in elastomers and plastic production).

“By implementing a nonlinear threshold response into a broad range of chemistries, we plan to print with resins such as silicones or other materials that impart functionality,” said Caitlyn Cook, LLNL materials engineer.

Many photopolymer printing methods create lovely parts, but the lack of functional materials available really hampers the adoption of these methods (as does the price of resins).

Hopefully this new line of resins will provide one more avenue into functional resin parts (at a reasonable cost).